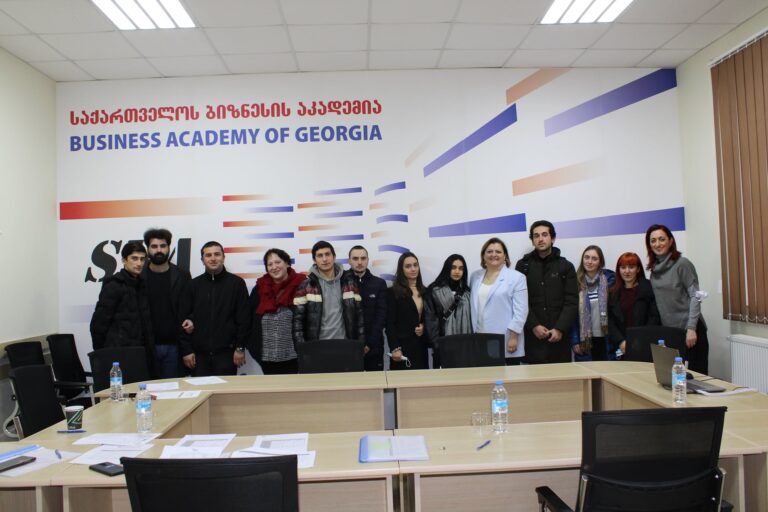 Business Academy of Georgia was started in November 2010, and it has now been approved as a community college after passing the authorization process. At this point, the academy was already running vocational education programs for Customs direction. The programs’ standards were set by the Academy.

At the end of 2013, the academy was given permission to become a higher education institution and was given the right to offer vocational education programs and a bachelor’s degree in business administration. In the same year, the academy started the Association of Professional Colleges, which is still working hard to meet the obligations set out in its mission.

In 2014, the academy gave the public a Bachelor’s program in Business Administration, which is working well.

In 2015, the Academy was able to get its Bachelor of Business Administration program approved. In the same year, the academy was the only higher education institution to receive a quality sign for successfully implementing Quality Management (EFQM) “model of excellence” projects organized by the Ministry of Education and Science of Georgia and the German Society for International Cooperation (GIZ).

In 2016, the academy took part in an event called “Branding 2016,” which was put on by private colleges, and it got the highest score possible: five stars.

In the context of vocational education reform, the academy is still working hard to come up with, implement, and improve modular vocational standards and frame programs.

The staff of the academy makes a number of educational tools to help students do well.

Since it was founded, the academy has tried to grow and improve professionally.

to the students and teachers not only a charming academic environment, but also a cultural one,

While they were studying, they did things for fun and to learn..

In order to Study in Georgia, here are the steps you must take.

Towards the end of this write up, we will provide complete guide on how to accomplish is of the Steps mentioned above.

These are the Bachelor programs, Master Programs and Doctorate programs offered in this University:

All the Medical Universities we have listed above are involved in the Bologna Process. Their Medicine (MD) programs are accredited by the Ministry of Education and Science of Georgia. They are approved by the National Center for Education Quality Enhancement. Since Georgia is a member of the European Higher Education Area, the certificates issues by the mentioned Georgian Universities are accepted in Europe and other parts of the world.

Global Accreditation/International Recognition:
These Top Medical Universities In Georgia are  members of the following organizations.

How To Apply For Courses

After you must have found a competent university to study in, make sure you are financially ready and then you can apply for admission. You can apply through our website Admission Fix

After submission, within 48hrs of fulfilling the application requirements, we will get in touch with you. Apply Now

According to the new laws that came into effect from May 12th, 2021, all International students are required to get a Study Visa in order to arrive and live in Georgia for study purpose. Even foreigners who can arrive in Georgia as tourists MUST apply for Study Visa if they decide to become students in Georgia.

For detailed information on Georgia’s immigration and Visa rules for foreigners, visit Ministry of Foreign Affair’s Website. To learn more about Immigration procedures for International students, you can read our article about Georgia Study visa for student

Find Accommodation and Settle In

Once you are an admitted student in Georgia and you have your student visa you must think of a place to stay in. Accommodation in Georgia for international students is not that expensive, but is normal that as a foreign student, you should strive to find the most financially suitable place for you.

As you prepare to find accommodation and settle in in Georgia, here are some of our useful guides you may want to look at.

If you would like to get Airport pickup services and other post arrival support services from Admission Fix. Kindly:

Employ professional Realtors to Find Flats/Apartments for you in Georgia.

You might also undertake international exchange programs with leading universities and colleges in the USA or in European countries and explore different research practices and themes. Students are also encouraged to apply to internships or work as research assistants in fields like Human medicine, Experimental Psychopathology or Psychophysiology.

All lectures, workshops, research are meant to advance your understanding of physiological, emotional, cognitive and social determinants of behaviour and further your knowledge of psychologic theories.

Georgia attracts millions of tourists every year and thousands of students arrive in Georgia to pursue the various educational programs available in Georgia. This is good for career development of students as it is common for students to meet people from different countries and cultural backgrounds willing to share their life experiences and insights on the career path the student has chosen.

Where can you work after you graduate?

Medicine is an extraordinarily diverse field with hundreds of career paths. Some specialties, like caring for people with mental and emotional disorders, are familiar to most of us. Others, like helping with the design of advanced computer systems or studying how we remember things, are less well known.

We wish you the best of luck in your pursuit of a medical
education at the University of Georgia and hope that you find the information
presented here to be quite useful. In the beginning of your quest to attend
college in Georgia, our service, Admission Fix, may be your most dependable and
trustworthy partner for information and help.

As the authorised admissions agent for several Georgia
universities, Admission Fix is your best
option (Country). In addition, we assist many international students every year
in fulfilling their dream of attending a Georgia university. If you want to
attend one of Georgia’s best medical schools, we can help.

To ensure that your plans to study in Georgia go as quickly
and smoothly as possible, we also offer career counselling, guidance on
University selection, full immigration/visa support services, airport
reception, help in finding housing and a bank account, and assistance in
obtaining a residence permit. We’re here to ensure your succeed as a medical
student at Georgia’s prestigious medical school. For
immediate assistance, please call or email us right now.

Top 12 reasons to Study in Georgia

Contact Us Today to Get Your Admission, Visa and Resident permit to Study In Georgia.

Get all latest content delivered to your email a few times a month. Updates and news about all categories will send to you.